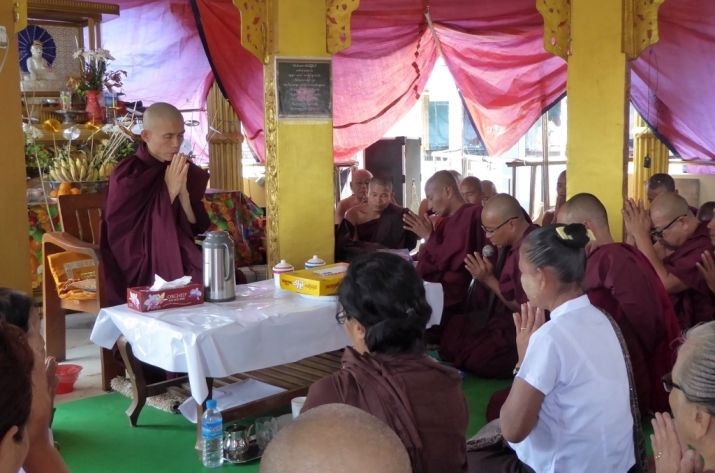 A taste of Burmese hospitality I’d just left the soft, warm Nirvana of Thailand where the memories of the beach and the mind-blowing conversations I’d had with people were still fresh in my mind.

I was very sad to leave the tropical paradise after spending weeks volunteering there and for the first time since travelling, I was looking at my journey to Myanmar with a little trepidation.

This time around, I’d opted to volunteer in a temple. Boy, it wasn’t what I’d expected.

If anyone had told me I’d be washing elderly, disabled patients in the middle of a township with Buddhism as its foundation, I’d have had them sectioned.

And yet that was exactly what I’d found myself doing.

The ThaBarWa Dhamma Center is one of many temple centres set up by a monk called Sayadaw Ashin Ottamathara. Sayadaw in Burmese is a title that literally translates as ‘Master’.

He is an inspirational and amazing man that has set up more than 40 different centres across Myanmar.

So here’s how it started.

When I arrived in Yangon airport, I couldn’t help but notice that all eyes were on me again as they were in China and Vietnam…

I guess they don’t see many black people in Myanmar. I looked at all of those smiling, curious faces and I wondered what kind of adventure lay ahead. And smiled back.

The cultural dress was also anything unlike I’d seen in other Asian countries.

In Myanmar, it is common for the men to wear Longyis, which is a long 2-metre cloth worn on the lower part of the body. I had no idea how to get to the temple which was a few hours from Yangon, so I caught a taxi. The taxi looked like a relic from the 1960s, with the seat covered in leopard skin cloth.

A feast fit for a queen

It was dark by the time we got to the centre, more than 3 hours later. And despite that 3 hour ride, the taxi only cost the equivalent of $8.

I was a little apprehensive as we drove into the centre and I wasn’t sure what to expect.

One of the residents who lived at the centre was there to greet me as I got out of the car. He was a thin, older Burmese man who looked extremely destitute. And yet he found the time to show me around and introduce me to a few people.

The poverty was real. I saw lots of open tents and people lying outside in the cold. Aggressive, stray dogs wandered around the streets and there was a derelict looking block of concrete apartments where the volunteers stayed.

Unsure what to do with me, the friendly guide then took me to an open-air tent where I was immediately surrounded by some of the women who worked in the centre. They smiled and brought me plate after plate of food. Cakes, curries, bread, rice… lots and lots of food. I immediately regretted eating dinner at the airport.

In Myanmar, it is taboo to leave food on the plate. But after forcing myself to eat 3 plates of the delicious food, they then brought out another plate of food.

I had no choice.

I was unable to finish. But I was floored by the sheer generosity of these women who had absolutely nothing and yet offered me all that they had, despite living in poverty and being a total stranger.

After the banquet, I was taken to the sleeping quarters for the volunteers and introduced to a Burmese lady called Maya, who welcomed me into the compound.

The sleeping quarters were fairly basic to say the least. It was a sweltering room, with 2 fans that the volunteers fought over. There were 7 beds in the room, and they all had mouldy mattresses that still had the black marks from the bed bugs that once (and in some cases, still) inhabited them.

The attached bathroom had no ceiling, a cold pipe as a shower, plus a toilet and sink. It was also home to hundreds of ants, cockroaches, spiders and cobwebs.

I really couldn’t complain, however, because it was still a luxury compared to the conditions that many of the people in the centre had to endure.

Some of the other volunteers invited me to participate in some of the tasks that were required, including, washing elderly patients, and doing alms rounds in bare feet.

Neither of those activities appealed to me. But I was surprised by how quickly I adapted. In the end, I did get involved in washing elderly patients and teaching some classes, but due to the lack of organization, this was not always consistent.

Alms rounds are when a procession of monks visit homes in the local area and collect food from local residents who donate it to the monastery. In this case, the food was used to feed poor and disadvantaged communities in Myanmar as well as the monks in the monastery.

The problem with Myanmar is that in many places, there is a lot of rubbish, animal dung and filthy water on the streets. As it was a requirement to do alms rounds in bare feet, I decided not to participate in that activity much to the contempt of the other volunteers. I guess those childhood memories of my sister getting ringworm from running around barefoot on cleaner pavements still haunted me.

The ThaBarWa Centre township covered a very large area and it contained several schools, dozens and dozens of homes, outdoor shelters, kitchens, medical facilities, dilapidated offices and countryside. It was possible to walk from one end of the township to the other but it would probably take a couple of hours at least.

So finding my way around was far from easy.

The centre had a very big focus on meditation, and participating in meditation classes. In their eyes, this counted as a form of volunteering.

I spent a lot of time in their library, reading through some of the many meditation books, which was strongly encouraged.

They were fascinating and full of techniques that I have never heard about before.

I also loved the library for another reason – it was the only building in the centre with air conditioning.

I ended up spending a lot of time in the library which came as a welcome relief from the sweltering temperatures of the classrooms and medical areas. The things I saw at the ThaBaWa Centre, and the people I met had a lasting impression on me that will last a lifetime.

But the real adventures were yet to begin… 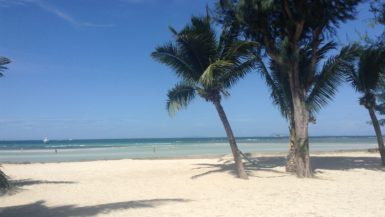 Buddhist Adventures On The Crystal Island of Koh Phangan